Those of you who have a Muse EEG – do you have any recommendations on a reputable battery supplier? Recently, the battery life has been getting much weaker and it conked out in the middle of a session. I did some searching and found the following blog posts, which include a detailed video showing how to replace the soldered battery in the left compartment:

My Muse EEG meditation headband has a dead battery

I bought a Muse EEG headband a couple of years ago on an Indiegogo crowdfunder thing. Which means I paid for it about four years ago because it took two years for them to get into production. But t… 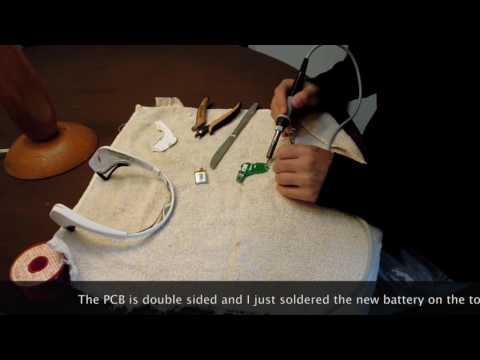 I replaced my Muse Headband battery

Further to my original post where I complained about my Muse meditation headband having a dead battery, my new battery arrived in the post this week and I managed to replace the old one successfull…

Ideally it would be good to get an identical replacement battery, but if not, at least an equivalent from a reputable battery supplier. The author of the blog posts bought one off of eBay, but I’d prefer to buy from a well known vendor if possible.

@kartiksubbarao The two most reliable sources for small lipos that I know of are Sparkfun and Adafruit. But the original battery in his Muse is 0.925Wh, or 250mAh at 3.7 volts, and the closest I could find was 400mAh on Sparkfun and 350mAh on Adafruit. These would give you a bit of extra battery life, but I don’t know that they’d fit. It was unclear whether the measurements Andrew posted were actually taken from the battery in his Muse, or if they were from the battery he found on eBay that was the closest match he could find.

I would probably go with the one from eBay, since it seems to be the closest match, unless you measure where it’s going to go and are sure one of the higher capacity ones would fit. (I didn’t see a link in his post, but these ones looks like they’re well-reviewed and have the same specs. Plus, since it’s a five-pack, you’d have a second (and third and fourth and fifth) chance if one of them was a dud for some reason.)

Thanks for the response. I did some more searching and I think I now know what “552030” stands for in the original battery. For example:

@kartiksubbarao Interesting! I had managed to figure out that that number didn’t seem to be related to voltage, capacity, or discharge rate, but hadn’t taken the next logical step

I adjusted the zoom on the photo in Andrew’s post until the original battery was ~30mm long onscreen, and it looks like a 35mm long battery (the 350mAh Adafruit one is 552035) would probably fit, depending on how it all fits together. (The Sparkfun battery, which is 5mm too wide as well as 5mm too long, probably wouldn’t.) Actually, it almost looks — based on the white marking on the board— like it’s designed for a 35mm battery!

You’d want to be careful, though, since it sounds like his eBay battery, which based on the number should have been the identical length + width of the original, turned out to be a bit longer. Maybe the measurement doesn’t include the terminals, or something?

Good points. Clever idea to match the zoom to 30 mm to compare

Very observant regarding the white markings on the board! [update, see below].

One other thing I was chewing on is whether it’s important to match the storage capacity as closely as possible, or whether it would be fine to go with a higher capacity battery. I’m not very familiar with the circuitry/mechanics of charging these kinds of batteries and any safety issues that might be involved. Without knowing more I’ll probably try to stick with 250 mAh or something close to it. 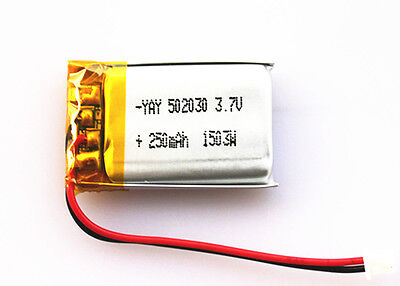 With protection circuit board. It has a plug so you don't need any soldering skill to replace the battery now!

I desoldered the old battery and soldered the new one to the power slots on the board. I used a piece of double-stick tape to attach the base of the battery to the board. As expected, it’s slightly longer than the original battery, but I was able to fit it into place. I charged it up and ran a Muse session – looks like it works!